On the path to the inhabitants of the church towers In 2007 the project “Residential space of church towers: NABU and church parishes unite for more active species protection” was launched in Germany  https://www.nabu.de/tiere-und-pflanzen/aktionen-und-projekte/lebensraum-kirchturm/index.html

The church towers are an ideal place for bats, owls and other animal species. The churches, which are particularly favourable to the protection of different species in this project, have received certificates and plaques (which are attached to the temple), which testify to their friendliness to these rare animals. In this way, anyone can learn which churches have already been found to be bats friendly and how the church building in your community can become a home for the animals. The campaign was initiated and implemented by the German Bell Advisory Committee. The Institute for Environmental and Religious Studies, taking over the experience of NABU, together with partner organizations from Romania, Hungary and Slovakia, started the international project “BAT4MAN: Raising Environmental Awareness of Local Communities through Joint Bat Conservation in Border Areas of Hungary, Slovakia, Romania and Ukraine” (project manager – Alexander Bokotey). In the framework of this project, the famous ornithologist Andriy-Taras Bashta – Candidate of Biological Sciences, Senior Researcher at the Institute of Carpathian Ecology of the National Academy of Sciences of Ukraine was invited to study bats. He carried out basic research and worked on the determination of bats species by various methods: by the presence of dropping, visual inspection of attics and bells, etc. Previously, the first stage of the study of bats took place (https://prozahid.com/pid-dakhom-khramu-v-hostiakh-u-nespravedlyvo-obvynuvachuvanykh-u-posibnytstvi-covid-19-kazhaniv/).

The second stage of the study was conducted in the are of Beregovo (Beregivshchyna). Bregivshchyna is a very interesting region in terms of architecture and nature, which was studied in detail and described in the works of regional expert Oleg Suprunenko, in particular in the monograph “Architectural, historical and natural values of the Beregivshchyna” (2013)  (https://zakarpattya.net.ua/News/117091-U-Berehovi-prezentuvaly-knyzhku-pro-arkhitekturni-istorychni-ta-pryrodni-tsinnosti-Berehivshchyny-FOTO).

There are still many interesting phenomena in this area that surprise us and are worth studying. In our case they are actually the towers and rooftops of Beregovshchyna´s temples.

The fact that the study of bats is carried out in summer is logical, because it is during this period bats live here, breed and raise offspring. In deep autumn and up to the beginning of spring bats move from under the roofs and towers of temples to the basements of buildings, adits and caves, because there is a stable air temperature, which prevents them from freezing.
The breeding process of bats is interesting and unique in its kind. It begins in October, when the animals are actively feeding before wintering. Females mate with one or more males, and then the most interesting thing happens: male sperm is canned in the female genitalia, resulting in fertilization is not immediately. In this condition, they stay the entire winter period. With the onset of spring heat, the bats wake up and leave their winter homes. The body of female speicies starts the mechanism of oocyte formation and its fertilization, as a result of which the females begin to develop one, less often two embryos. The complete formation of calves should take one or two months. They are usually born in June, blind and hairless, eating the mother’s milk, holding on her body for up to two weeks. Considering such physiological peculiarities of reproduction of bats and growth of different dangers, it is very important to protect this species of mammals. And to do that, we need to learn more about them. That’s why employees of the Institute for Ecological and Religious Research have learned to put into practice the experience gained from the Association for the Conservation of Nature and Biodiversity of Germany by carrying out expeditions to find and study different types of bats, noting on the map of the temple, where they were found single representatives, and where – the colonies of one or sometimes even two species. Three routes were formed and explored over the course of three days: 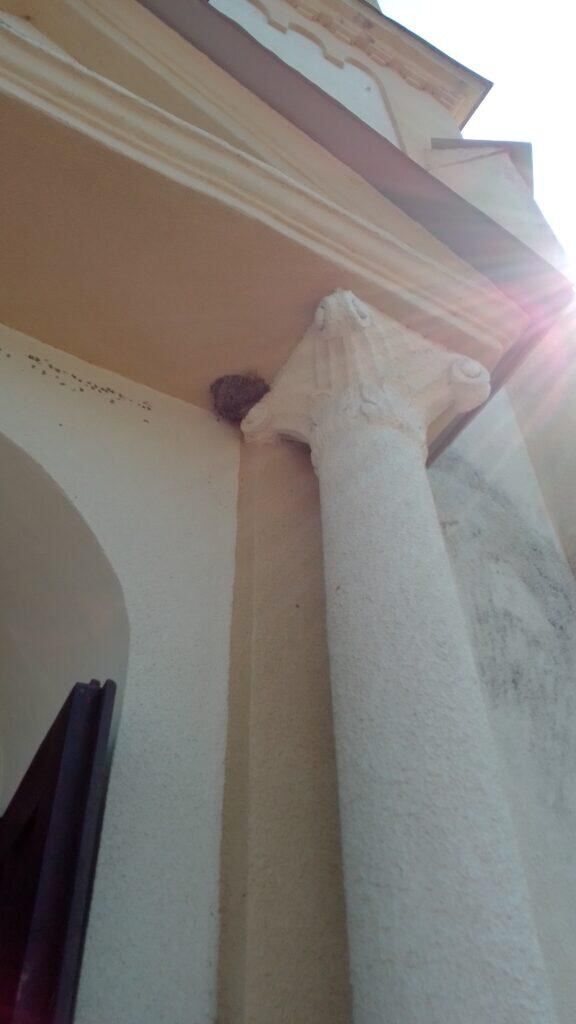 Photo 2. The barn swallow and its nest.

Some interesting facts about the temples themselves

At the beginning the researchers examined the temples of Beregovo. In the Roman Catholic Church of the Exaltation of the Holy Cross (an architectural landmark of the XV century) Photos 3 and 4. Historical inscriptions and bells in the Roman Catholic Church of the Exaltation of the Holy Cross

Bats also live in the tower of the Greek Catholic temple in Kvasovo village. Photo 5. Temple of the Intercession of the Blessed Virgin Mary in the village Kvasovo

КAs a house for bats can also serve the hollow in the century-old linden tree that is situated by the temple.

Very interesting is the temple in Janoshi village. Besides the fact that there are two colonies of bats living here, this temple amazes with other interesting things. First, it is an iconostasis and paintings, which were made by a famous local artist of the XIX century F. Vydra. Photo 8. Iconostasis and part of the painting by F. Vydra

In the yard of this temple is buried a man who died in 1918 from the spanish flu – an epidemic that raged at the time in Europe.
The village of Badalovo is known for its reformist temple. Its doors were opened to researchers by a builder who worked on the recent restoration of this temple and told many interesting facts about the restoration itself. Since the roof of the temple was restored, no bats were found here, but the researchers had a luck to find traces of owls. After Beregovsky region, during the third stage of the expedition several dozens of temples of different confessions in many villages of Vinogradovsky district were examined: Fedorovo (Tivodorfolvo), Botar, Chetfalvo, Shalanky, Perekrestya, Nove village, Matiyevo, Verbovets, Chorny Potik, Kidyosh, Velyki Beregy, Verhni Remety. We also investigated several temples of the city of Vinogradov, two of which received fruitful results, having found representatives of different colonies of chiroptera.
In addition, the most numerous colony of bats was found in the village Bogarevitsa, Irshavsk region, where researchers turned off the main route, seeing an Orthodox church on a hill. Remaining settlements of Irshavskiy district are planned to be explored during the next expeditions. In general, in every village and city of Transcarpathia you can find interesting architectural and historical temples. And when the study of biodiversity of bats and birds of prey (which is fond of Leonid Pokrytyuk, who also joined the team of researchers) will be completed, these temples will become even more interesting, in particular for many tourists who are fond of wildlife. An example and proof of this is the chapel above in Górecko Kościelne (Poland), which is one of the points of the natural trail in those places. The chapel is known for the fact that bats live under the roof and therefore, in addition to its ritual function, it also has a nature conservation and environmental education function. Photos 14 and 15. Greek-Catholic church in Vinohradovo

Researchers are sincerely grateful to all priests and pastors and responsible persons who have sincerely welcomed researchers and opened temples to the possibility of exploring the bats and birds in them!

Some more temples of Beregovsky district Mikhail Bilanich, employee of the Institute for Ecological and Religious Studies, Head of the Nature Sector, Legotsky Warehouse, local historian.